Welcome back for week six of our Daredevil recaps! 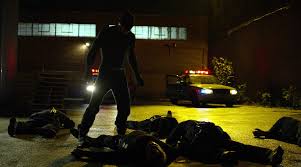 We pick back up exactly where we left off last episode, with the cops telling Matt as the man in the mask to yield to arrest. It isn’t until they click the cuffs on that we realize these cops are dirty and have been tasked with “taking care of” Vladimir as they were told, and those are fighting words to Matt. He starts off with a well-placed head butt and begins to single-handedly take down all of the officers. A few standing back tucks and elbows to the head later and Matt’s the only man left standing. Hearing sirens in the distance, Matt and Vladimir scram and one of the cops wakes up in time to murder Sergei and sic the rest of the department on the “two suspects on foot.”

Ben uses playing cards to try to figure out the hierarchy of Union Allied, getting stumped when it comes to who the King is. Outside his office, his editor reports the building explosions Fisk and Vanessa drooled over and once he hears the locations of the explosions, Ben is certain it’s nothing to do with gas leaks.

Fisk’s motorcade whisks him and Wesley through the streets and Wesley gets a call that Vladimir is missing. They think that the man in the mask only protected him from the police because he wanted to question him for information about Fisk and Fisk promises to deal with Blake, the reason Matt even knew where to show up, later. For now, he says, they need to contain the situation.

Speaking of Blake, he and Hoffman come upon a seriously injured Russian in one of the explosions. Blake puts pressure on the rebar sticking through the man’s leg and the man swears he doesn’t know as he begs Blake to stop. When he does stop, Blake puts a bullet between the man’s eyes and tells the rest of the officers to shoot anyone else they find alive in the head.

Matt carries a dying Vladimir across his shoulders into an abandoned building and the cops know where he is almost immediately. Vladimir vows revenge for his brother’s death, but Matt doesn’t claim responsibility for that one, telling him that he’s being played by Fisk. Matt says that he wants Fisk on trial for his crimes and Vladimir wants to know what he gets out of ratting on Fisk. Matt tells him he’d get payback but Vladimir is content to die right there on the floor.

Foggy and Karen bring Mrs. Cardenas to the hospital and, conveniently, Claire is her nurse. Explosion footage on television cause them to remember Matt and they worry that he might be in danger with all the destruction in Hell’s Kitchen (ha!). Then Foggy realizes he was hurt in the explosion as Shirley catches up to Claire, wondering what the hell she’s doing on duty after she’s been in a car accident (convenient excuse). Claire chalks it up to a big mistake, and just then, the big mistake calls her.

Matt’s calling Claire for some tips on how to keep Vladimir alive. She’s not pleased to find out Matt’s trying to save the jerk who had her beat up, but she acquiesces. After Matt tells Claire what’s in his immediate vicinity, she leads him through cauterizing Vladimir’s bullet wounds so he doesn’t bleed out while Matt questions him. Sirens wail outside and Vladimir screams as Matt burns his skin, to the attention of a rookie patrol officer outside. The officer enters the building and finds Vladimir, calling it in. Matt appears and gives him a chance to walk away, but the officer doubles down on his calls for assistance instead, so Matt knocks him out. Immediately, Blake picks up the call and a pack of cop cars bear down on the abandoned building.

Blake and Hoffman control the situation and Ben shows up to gather info and Blake pays him back with a veiled threat. The dirty cops call Wesley to report on the situation who then fills in Fisk.

Fisk wants to get the situation behind them but Wesley tells him that Ben is on their tails. He doesn’t think Ben will be such a problem, and tells Wesley to reach out to all of their media contacts so they’ll see “what’s about to happen in Hell’s Kitchen.”

Vladimir wakes to find Matt tying and gagging the rookie officer and goads him. Matt fills him in on how he saved his life and tries to convince him to roll on Fisk. Vladimir has nothing to say on the topic but is surprised to find out how Fisk took out his whole business. This prompts him to spill. He says Wesley was sent as an envoy to invite his cronies to be part of Fisk’s concern and gain access to all of their connections. Vladimir’s amused at how little Matt really knows about all of this and says the only name that matters is that of the accountant behind the enterprise. He whispers and just as Matt leans in close, he head butts him and they fight! Ding ding ding!

With the aid of a 2×4, Vladimir beats the brakes off Matt, eventually plunging him through the old building’s floor down to the first level. Matt falls into a familiar, concrete-eating position. Outside, Blake and Hoffman try to get under Ben’s skin about television usurping newspapers but Ben claps back, saying he’s still got some worthwhile stories and maybe these two dirty ass cops will pop up in one. Blake renews his veiled threat.

Karen tries calling Matt again, who still has his hands a little full, and she and Foggy try not to panic at not having heard from Matt. After convincing a recovering Foggy not to leave to try to search for Matt, Karen goes to find sustenance – and Foggy calls Matt again, anyway.

Back in the building, Matt regains consciousness and peels himself off the floor. Looking over, Vladimir is laid out on the floor next to Matt and Vladimir has no regrets. Then Matt hears Vladimir’s heart stop and immediately starts reviving him, pounding on his chest until he comes back. He tells Vladimir that he won’t let him die until he gives Matt what he needs on Fisk.

Wesley has arranged, with the help of Blake and Hoffman, for Fisk to enter the danger zone outside Matt’s current hideout, all the way down the walkie talkie. ESU arrives to the scene in a flurry of activity and Blake admonishes them to shoot anyone who moves.

Matt uses his acute hearing to find a way out and begins to dig under some rubble, uncovering a sewer grate. As he begins to pry it off, Fisk comes over the rookie cop’s walkie asking to speak to the man in the mask. He answers, and they go back and forth about the validity of each of their motivations and courses of action. Matt vows revenge and Fisk says he’ll fail, and we see a sniper setting up on a nearby rooftop. Fisk says the whole city will believe that Matt is behind the explosions in the city, so he offers to let him live if Matt simply kills Vladimir for him. Matt declines and promises to take Fisk down eventually, and as he reiterates – again – how Matt will fail, Wesley gives the order to the sniper to take his shot.

The sniper shoots at Ben but hits Blake instead, along with two other officers. The scene erupts into chaos and Ben tries to save Blake, and Fisk tells Matt that he did what he had to do before hanging up. And then video of the shooting and of Matt beating up the officers who were going to kill Vladimir are played on every news station – including the ones playing in the hospital. Claire, Foggy, and Karen all see this, and Karen doesn’t believe that the man in the mask is truly behind all this destruction.

Matt laments his lack of super strength when he gets a call from Claire. He tells her that Fisk was behind the cops’ deaths, not him and begins to hear officers infiltrating the building. Matt tells Claire that she was right to guard her heart from him and tells her to take care of herself in case he doesn’t make it.

With the help of Vladimir, Matt finally gets the sewer grate to give and they escape down the tunnel. Officers arrive and find the rookie – and murder him. As they limp through the access tunnels, cops catch up to them and Matt gives them the beatings of their lives in spite of their automatic weapons.

Vladimir is too injured to go on after this, saying he’ll stay and head off the five cops still on their tail. He also finally rolls on Fisk, giving Matt Leland Owlsley as his next target for taking down Fisk. Vladimir sings in Russian while making his last stand against the cops and we hear heavy automatic gunfire as Matt escapes.

This site uses Akismet to reduce spam. Learn how your comment data is processed.

We are temporarily closed. No orders will be fulfilled at this time. Dismiss