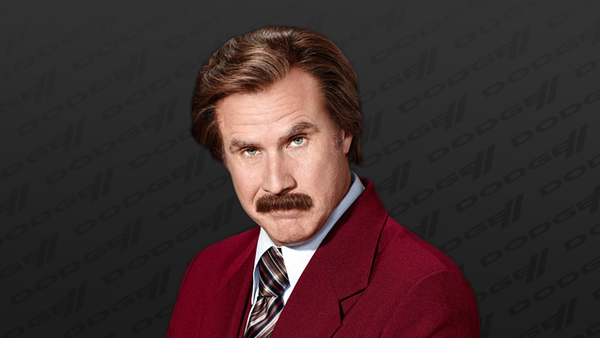 I don’t know how to put this… but the Dodge Durango is kind of a big deal.

That’s at least according to Dodge’s newest spokesperson: Ron Burgundy.

In a clever (and, may we add, absolutely hilarious) dual advertising campaign, Dodge has joined forces with Paramount Pictures in a series of new short commercials aimed at advertising both Dodge’s remodeled SUV and Paramount’s new film, Anchorman 2: The Legend Continues.

In the advertisements, Burgundy (portrayed by Will Ferrell) struggles with the aspect of “MPG”, shoos away dancers who got a little too close to his ride, verbally abuses a horse, and educates the masses into just how much gum can fit in the Durango’s glove box. Spoiler Alert! It’s 70.

Check out just a few of the advertisements!

What was your favorite advertisement? let us know in the comments below!

If the Sith Lord, Darth Vader, drove a car, this would be it! In the latest edition of Velocity Channel’s Inside West Coast Customs, huge Star Wars fan Ryan Friedlinghaus, was tapped by Lucasfilm & ILM to create a Star Wars themed car. After an initial design meeting with top ILM designers, it was decided that West Coast Customs would build a car that Darth Vader would want to drive. The result was this tricked out Volkswagon Passat “Vader Car” equipped with red glowing lights and black matte trim over a black glossy finish.

“This was one of those ones that was obviously very personal to me. I mean, words can’t express how excited I was to build this car, and to get the reaction that I got today, I think it hit home. We didn’t overdo it where, I was worried, you know, if do we too much its gonna just look cheesy, it’s not gonna represent the brand the way we want to represent it. This car you can actually get in and drive it. People will look at it and say ‘Wow, that’s and awesome car.'” -Ryan Friedlinghaus

The car will be on display in Orlando at Star Wars Celebration VI from August 23rd-26th and you can win tickets to go see it. All you have to do is visit either the West Coast Customs or Star War Celebration VI websites to enter.